I bought a microplane this week, and I got to use it today! It was a banner day! I don't know what that expression means, but it sounds like something exciting.  Just like using my microplane for the first time.

Today's inspiration comes from my favourite food magazine, the LCBO's Food & Drink magazine. They have the BEST recipes.  This one was originally for grilled spatchcock chicken, but I don't have a barbecue right now, and I had defrosted chicken breasts... so I just used the marinade since it sounded amazing. 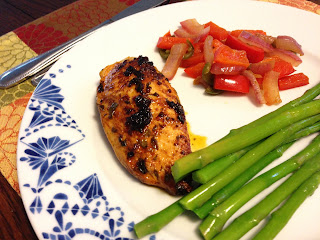 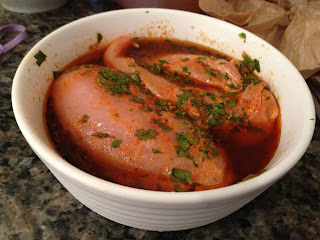 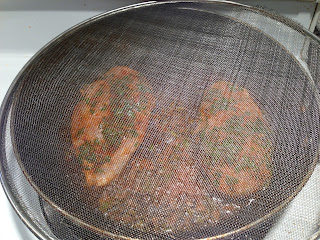 Email ThisBlogThis!Share to TwitterShare to FacebookShare to Pinterest
Labels: Dinner

I have a problem, an addiction really.  My problem lies with the 4 pints of blueberries, 2 pints of fresh Ontario strawberries and another pint of raspberries in my fridge.  I can't help but keep buying them, because they're so fresh and so cheap.  3 pints of blueberries for $5!

Anyway, a friend of mine was having a barbecue last weekend, and I volunteered to bring some desserts so that I could put some of those delicious berries to good use.  I thought about strawberry tarts, but I was afraid that leaving custard out in the sun would be a disaster.  I decided to do something I hardly ever do, check out all the food apps on my phone! It was fun, and I found a recipe for blueberry hand pies which looked both easy and delicious!  I decided to make them tiny, so that they would make a good bite-sized treat. 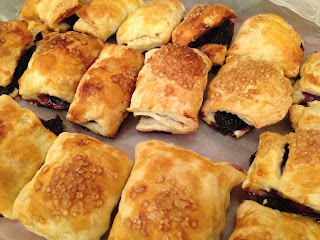 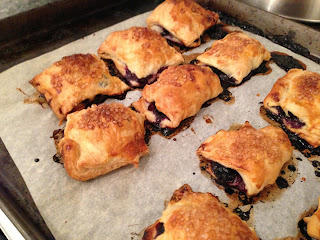 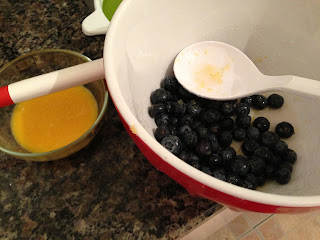 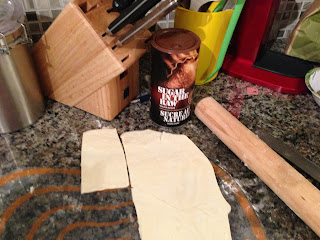 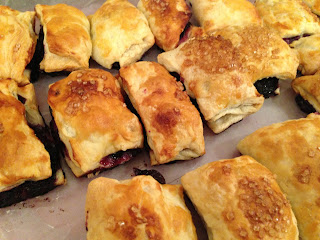 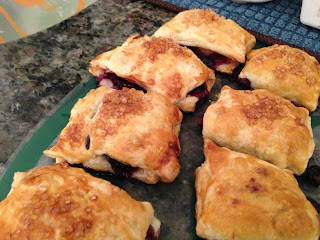 Enjoy some tasty seasonal fruits, everyone!

As a kid, I always hated when my mum would make gaspacho. I didn't like cucumber, and I HATED raw tomatoes.  Now that I've grown up, well at least taller, I've come to love tomatoes, and I have a healthy respect for fresh cucumber (although we're still not best friends).

I went to the Taste of the Food Terminal in Toronto this past weekend, and I came home with a ridiculous amount of fresh fruits and veg. Including 3 cucumbers.  I still don't love cucumbers, but I sure couldn't let them go to waste.  I asked around, and several people (my mum included) suggested I make gazpacho.  So I did. 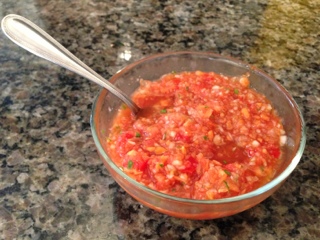 For those who don't know, gazpacho is a cold soup which is Spanish in origin.  It's main ingredients are tomatoes, (bell) peppers, cucumber and onion, and a brief survey of recipes online show many, many possible additions to those base ingredients.

This recipe is based on my mums, in that it is hers, but it's one of those frustrating recipes where you add "enough" of each ingredient.  I've tried to make it as straightforward as possible. 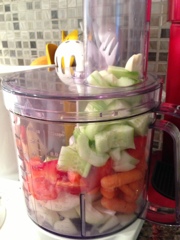 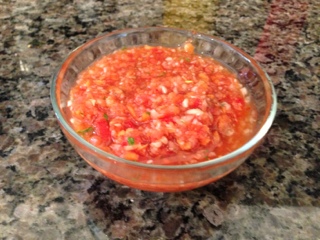 This recipe makes enough to feed a small army, but on the upside it keeps well in the fridge for up to a week.  I've heard mixed responses online as to whether this can be frozen or not.  It depends on how smoothly you blend the soup, I would imagine.

I've been on a delicious kick lately.  I'm making flavoured cream cheeses.  Why not just buy the pre-flavoured ones, you ask? Well... as far as I've seen there's no roasted garlic and jalapeno, or chipotle in adobo flavoured ones sold by Philadelphia. That's why.

And let me tell you, I love cream cheese, but I might marry these flavoured varieties.  And the best part -- no matter how good they taste on day one, if you make it to the end of week one, they get even better.  The flavour deepens and improves as it sits in your fridge.

I got this idea from a story I read online, and a few of us ladies brain stormed until the ever lovely Queen of All That Is Delicious posted a recipe for Nariz que Moquea, also known as schmear.  I've made it a few times and it's absolutely amazing.... so I wanted to try and come up with my own variation.

For this recipe, I roasted my own red peppers and garlic, but you could use store bought roasted peppers. I haven't quite gotten the hang of roasting peppers yet, so no recipe for you on that. But you're smart, I bet you can figure it out on your own, or maybe in a few weeks I'll post some instructions. 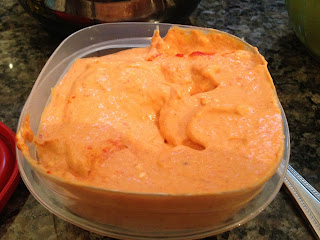 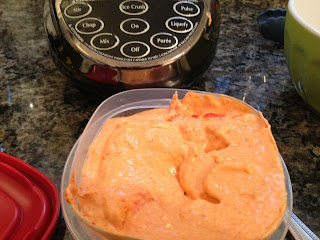 This will be great on bagels, toast, tortillas, or a spoon.
Posted by Ains at 12:55 PM 1 comment:

I asked my friend last weekend what I should do as my cooking adventure this week. She said "perogies!".  Challenge accepted.
It was a brilliant idea. 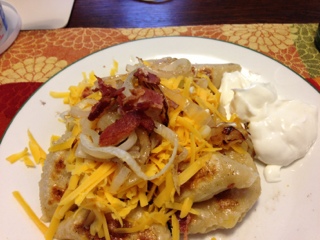 Perogies are a favourite guilty pleasure of mine.  I say guilty because they're served with cheese and bacon on top and sour cream on the side.  Not very healthy, but definitely very tasty.

Friendly warning however, this took me a little over 3 hours.  It wasn't difficult, it was just a long process. I started by making the filling, and let it sit on the counter to cool down while I made the dough.   Also -- you really really want to get a dough press for this. You can buy them at the dollar store. It's inexpensive and super useful if you're ever going to make dumplings, or ravioli, or even fancy finger sandwiches.  My mum happened to mention that she had one last week so I traded yard work for the use of her dough press to make these.  I really dislike yardwork. 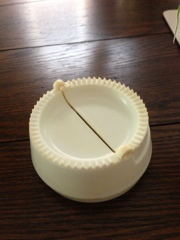 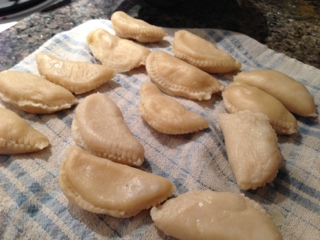 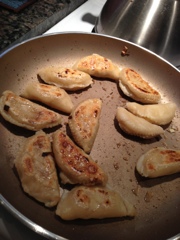 These perogies were fantastic, but they're definitely a special occasion treat.  They took an entire afternoon to make.  I haven't tried the frozen leftovers yet, but the fresh ones were better than the frozen ones you can find in the grocery store. 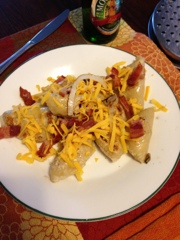 In honour of spring weather and fresh produce, I decided to make a fruity, refreshing pitcher of "something", and this came to mind. 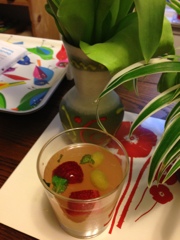 I love lemonade.  I always have at least one can of lemonade in my freezer.  I find it so refreshing, and adding the mint just amplifies that. 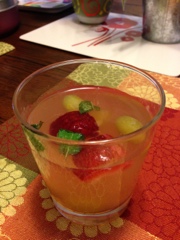 This can be served as-is, or can be mixed with vodka, gin or alcohol of your choice for a fresh cocktail.  Best enjoyed in the sun with friends.

Frozen grapes are great to keep around.  When you buy a bunch of grapes and you know you're not going to finish them, rinse a bunch off, remove the stems and put them in a freezer-safe Ziploc bag.  They make a great healthy snack, or you can use them in place of ice cubes for a fresh summery drink.

I'm still on a hot-sauce kick. My fridge is stocked with Nando's peri-peri (in both hot, and mild herb), Frank's Red Hot, and Sriracha!  Yesterday I got a snack fever and instead of eating something, I surfed pinterest for Sriracha recipes. It was super fun, and strangely satisfied my appetite.

I've made blue cheese, and herb and cracked pepper butters before, but when I came across this little gem over at The Endless Meal, I thought to myself that the possibilities are endless.

If you're not familiar with Sriracha, it's a brilliantly flavoured asian-style hot sauce, made with red chillies.  If you can't find it in the asian food section of your local grocery store, plan a trip to the asian markets near you. Much like Franks, you can put this on anything! I've even seen recipes for Sriracha-based sweets, although I'm not sold on those. 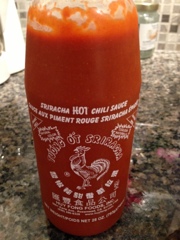 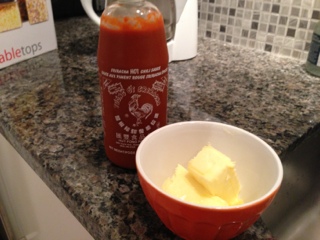 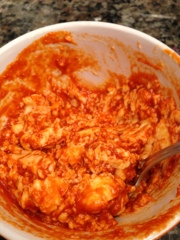 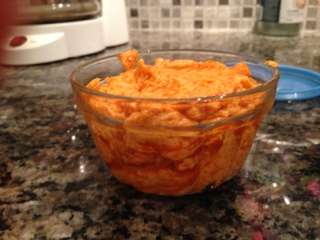 Recommended use:  Grilled Cheese and Apple Sandwiches with Sriracha Butter.  I had these for lunch today actually, oh my goodness. Seriously.

In case you need more ideas about Sriracha, check out the Sriracha cookbook blog (and their book too), and Bon Appetit's post on 25 Ways to Use Sriracha.

Even better, check out The Oatmeal's Ode to Sriracha.

The Girl Behind the Blog 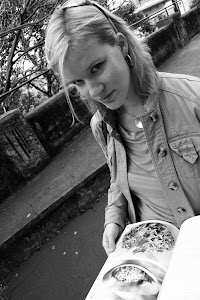